More than a Century of Worship and Service

For additional information about the history of the Duff Street United Methodist Church, download the attached file church_history.    Information is from our Centennial Celebration brochure which was compiled and written in 2004 by Jetta C. Baker and Reverend Joyce Day, Minister of Discipleship. 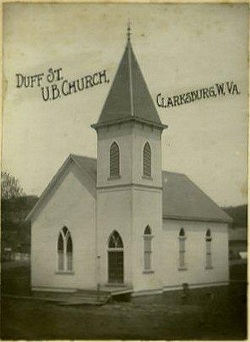 July 1905 - July 1915
For more than a hundred years a church building has been standing on the corner of Duff Avenue and Baker Avenue, a symbol of the living presence of Jesus Christ in our midst.   This building is our church home, but we, the people of Duff Street United Methodist Church -- old and young -- are the church, the Body of Christ.   Our head is Jesus Christ, the founder and foundation of the Universal Church.

In 1904, thirteen men and women had a vision to build this church.   We continue to carry that vision forward into the future.   We pass on the heritage give to us by our predecessors and use it to inspire new visions in our children and youth so that they will lead us even closer to Christian perfection during the next 100 years.

In the Beginning...  In the early years of the 20th Century, a fast-growing community known as the Stealey Addition to Clarksburg felt a need and had a vision.   Believing that theirs was a God-inspired vision, they immediately went to work to do something about it.   On November 8, 1904, a group of thirteen men and women met at the home of C.W. Burnside, 302 Milford Street, for the purpose of organizing a class of The United Brethren in Christ.   At this historical meeting, the decision was made to build a church -- the first one in Stealey.

On July 9, 1905, only eight months after the meeting of those thirteen men and women, the little wooden church on the corner of Duff and Baker was dedicated by the Reverend W. M. Weekley.

The congregation grew so rapidly that it was not long before a larger structure was needed.   By July 1, 1915, excavating was begun for the building of a new structure.   On May 16, 1916, the brick building was dedicated.

Pictures of the church building coming down. Music "The Hand of Our God" sung by Susan Seders, Marybeth Chien & David Webster on March 25, 2012.

Update -- The brick building completed in 1916 on the  corner of Duff and Baker Avenues had serious structural issues and was  considered unsafe.   Worship was moved to the Multi-Ministries Building in July 2009 and the old Sanctuary building was demolished in March 2012.  Construction began in August 2019 and Duff Street UMC moved into their new Sanctuary on the corner of Duff & Baker Avenues on February 9, 2020.


There are two worship services each  Sunday morning.    The church continues in ministry to LOVE GOD, LOVE  OTHERS and SERVE THE WORLD.